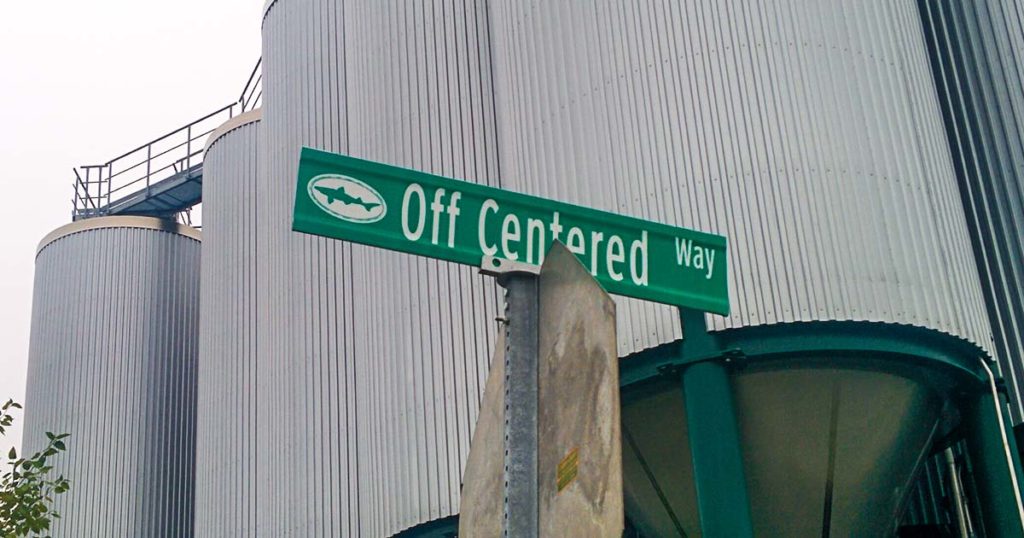 A Trip to Dogfish Country

September is a special time of year for us. Not only does it mean that summer is over and fall is upon us, but that our wedding anniversary is here. We tend not to make a big deal out of it, typically choosing dinner at a local restaurant and maybe some small gifts for each other, but recently we decided to get away for a bit. We’d only have a few days, given that I just started back to work and Jon had used most of his vacation days by that point in the year. So we did what any beer loving couple would do: we headed to Dogfish country for a long weekend!

To say that our relationship with each other, and with beer, has grown over the past 9 years would be a slight understatement. When Jon and I first started dating, Bud Light was my beer of choice, while he went for a Guinness. I felt cultured when my friends got me to try a Leinenkugel Sunset Wheat or an Abita Purple Haze. Oh to be so young and naive about what good beer was!

Jon and I had originally made a trip to Delaware back in April 2010, and we were able to tour the Dogfish Head brewery. However, we both knew that a new tour was in order since they had expanded exponentially, not to mention, they added the awesome steampunk treehouse since then! 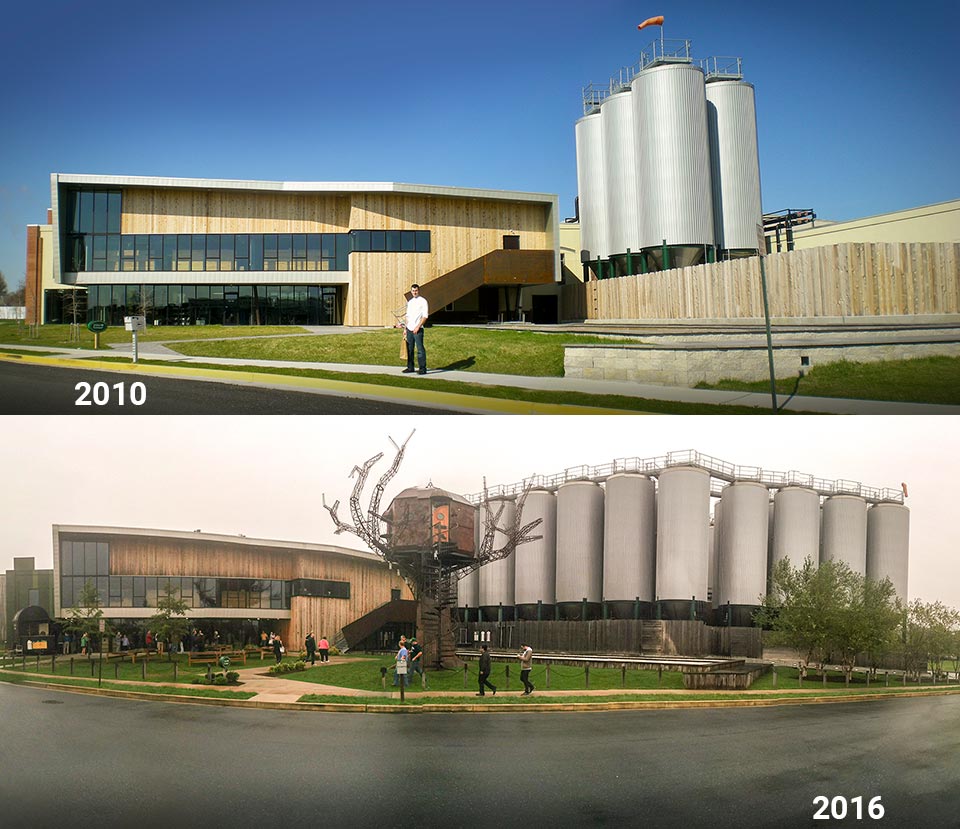 As usual for a long weekend getaway, we left on a Thursday night after work, giving us all day Friday and Saturday to explore, before heading out by mid-afternoon on Sunday. We were about 45 minutes into our 5-hour drive when it started to rain and only got worse the closer we got to Rehoboth. We arrived at our fabulous accommodations around 11:00 pm and we headed up to bed. (A full day of work, along with driving makes for a long day, but this is our preferred method when taking a long weekend trip.)

I wish I could say that the sun was out the next morning, but that wasn’t the case. On a positive note, the pouring rain had stopped and was replaced by intermittent showers. Our first order of business was getting some food in our bellies. Jon’s usually in charge of finding places to eat as I don’t seem to have much luck picking restaurants, but I obviously get a vote too. We decided on trying out Kaisy’s Delights down near the boardwalk. A kaisy, or kaiserschmarrn pastry, is an Austrian dessert that can most easily be described as a cross between a pancake, french toast, and a funnel cake. Definitely not our typical breakfast fare, but tasty nonetheless. 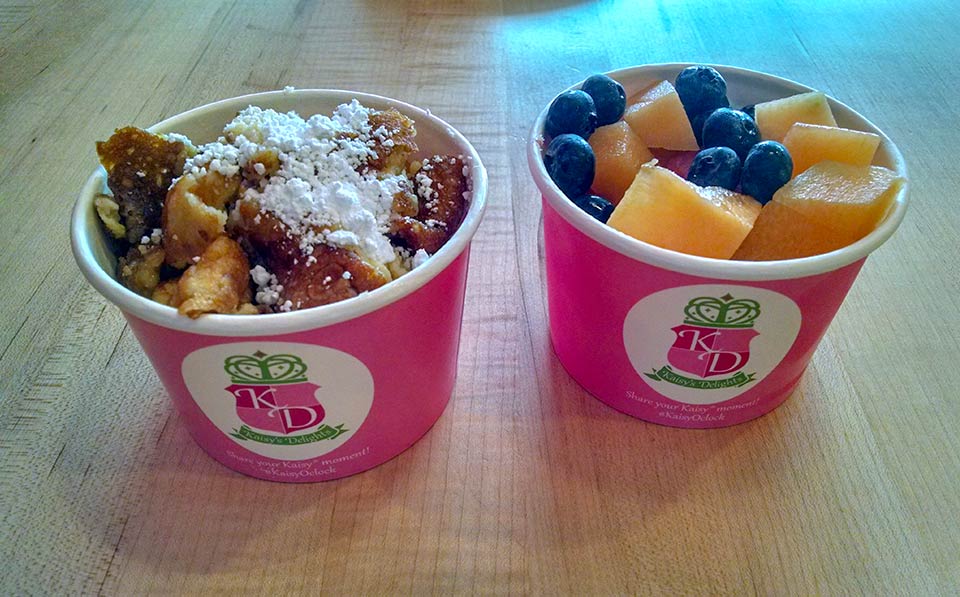 After breakfast, the rain had stopped and I wanted to get some pictures on the empty beach. I never ended up leaving the boardwalk because the wind was so bad. Instead of a leisurely stroll, we (okay, I) ran away at top speed! What could be described as gale force winds were whipping off the ocean, causing me to get sandblasted. No joke! In the time it took to snap one picture, I had sand in my hair, my coffee cup and in my coat pockets. #nothankyou 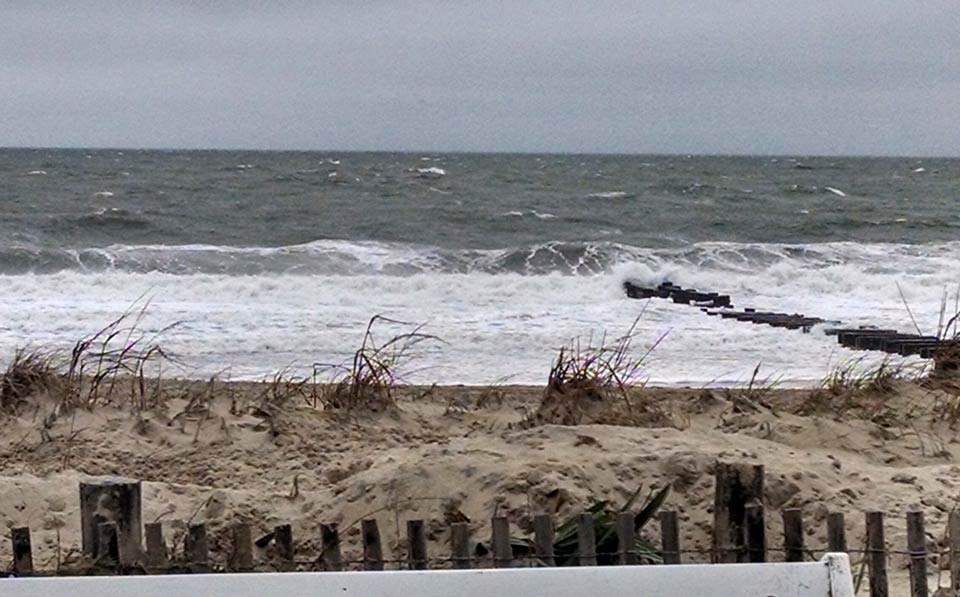 Thankfully I was able to escape the torment of the wind and shake off the remaining sand in the wonderfulness that is Browseabout Books. Seriously…this place is not to be missed! I wish I had more time to spend here, but there were other stores to check out and a new brewery to visit. There’s only so much time in a day, people.

We drove out to 16 Mile Brewery, which is not 16 miles from Rehoboth Beach. More like 19 miles and almost a 40-minute drive because of the speed limit and stop lights along Route 1 & 9. Either way, this place was a nice find on a Friday afternoon. We each ordered a flight and shared a giant soft pretzel with mustard that was available to patrons for free. 16 Mile regularly has food trucks and live music, but we were just happy to have some good beer. Since we were there in late September, they still had some summer beers on tap, including Watermelgian – a watermelon Belgian beer. This was on point! 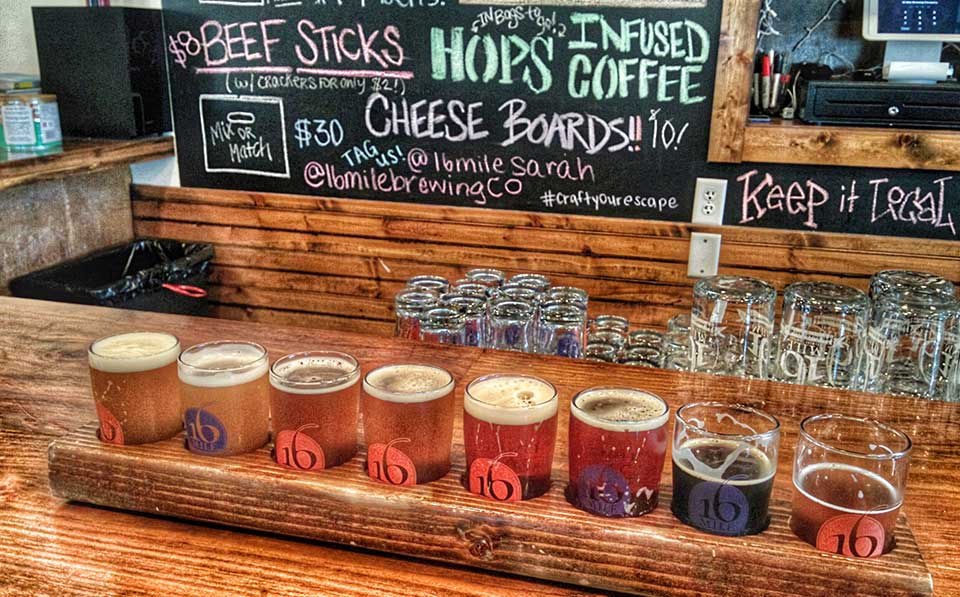 Side note – when we travel, we typically only eat two proper meals a day. A late breakfast and then dinner, hopefully with some type of snack in between. Does anyone else do this?

That night we headed back to Rehoboth for dinner and drinks at the Dogfish Brewpub (now called Dogfish Head Brewings & Eats). Despite Dogfish having 3 other alehouse locations, this is their flagship location where it all started back in 1995. In the past 20+ years, Sam Calagione’s goal has been to serve up amazing food, special release beers, and cocktails, alongside good music. (Be sure to check out their brewpub exclusives on cask or from the Randall.) Clearly, he’s got this down pat! Our only regret was that we knew they were expanding the restaurant and outdoor patio, but it wouldn’t be complete until well after our visit. I foresee another Delaware road trip in our future. 😉 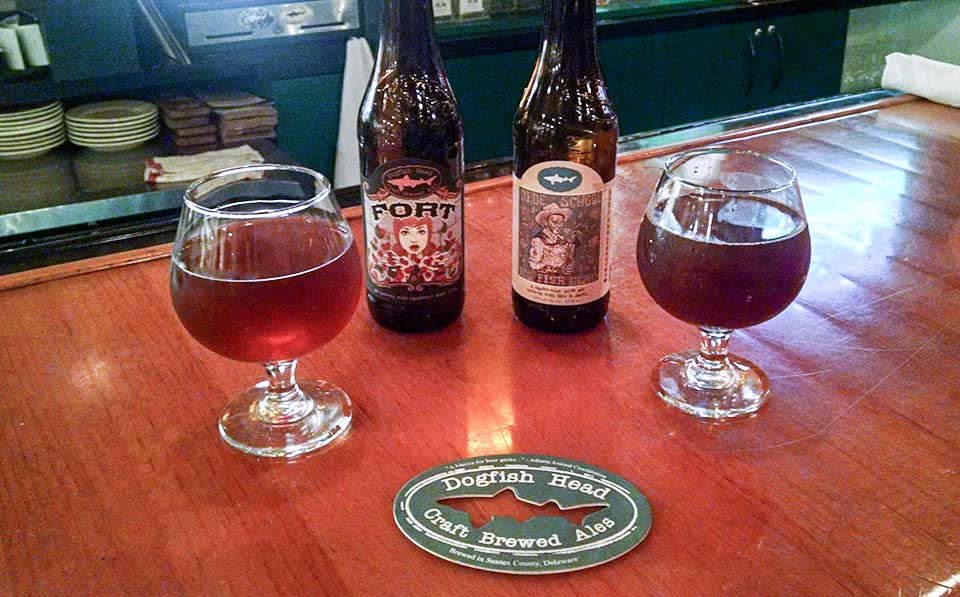 Saturday morning we drove to the nearby town of Lewes and had brunch at Nectar Hill Cafe and Juice Bar. Thankfully the insane wind had died down, though it continued to rain on and off for most of the day. But that didn’t stop us! Being the Dogfish fanatics that we are, we popped into the Dogfish Inn to get a glimpse of the cool digs and buy a bag of the Dogfish Chicory Stout Coffee Beans, which are roasted down the street and only available for purchase at the Inn. Since we were lucky enough to be gifted free accommodation from a family friend, we had no logical reason to spend extra money to stay at the Dogfish Inn. But let me tell you…this place is on our list for the next trip to Delaware! We spent the rest of the morning checking out the various shops around the quaint downtown area and buying even more coffee from Notting Hill Coffee Roastery. (When I said we like “brews”, I wasn’t just talking about beer.) 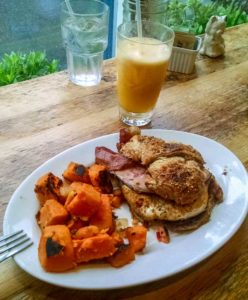 After a leisurely drive from Lewes to Milton,  we arrived at the Dogfish Brewery with plenty of time to check things out and grab a quick bite to eat, prior to the start of our Grain to Glass Tour. On our last visit, way back in 2010, we did the standard 1-hour tour. If you’ve never been to the brewery, you’re just getting into craft beer or you’re with a bigger group, I recommend sticking with the free tour. However, if you’re a serious beer geek, you have at least 2 hours to spare and you prefer a slightly smaller group, then you should consider the Grain to Glass Tour. Other perks include a quick stop at the in-house distillery (along with samples), an aged sample from Sam’s secret beer stash and maybe coolest of all, the chance to go inside the steampunk treehouse. This tour will set you back $30 a person, but we thought it was well worth it! Tours are limited to Saturday and Sunday, typically with only 2 tour times a day, but be sure to check the calendar. I would also book well in advance as these tickets sell out fast! 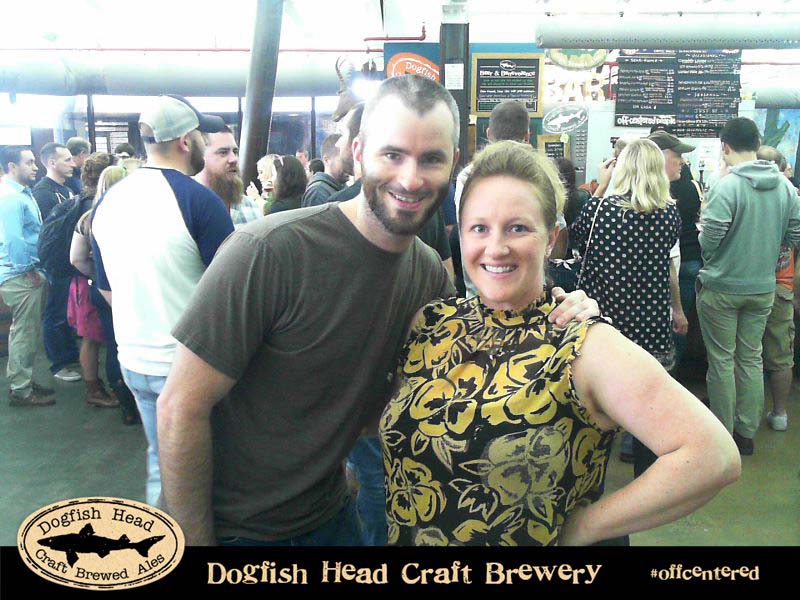 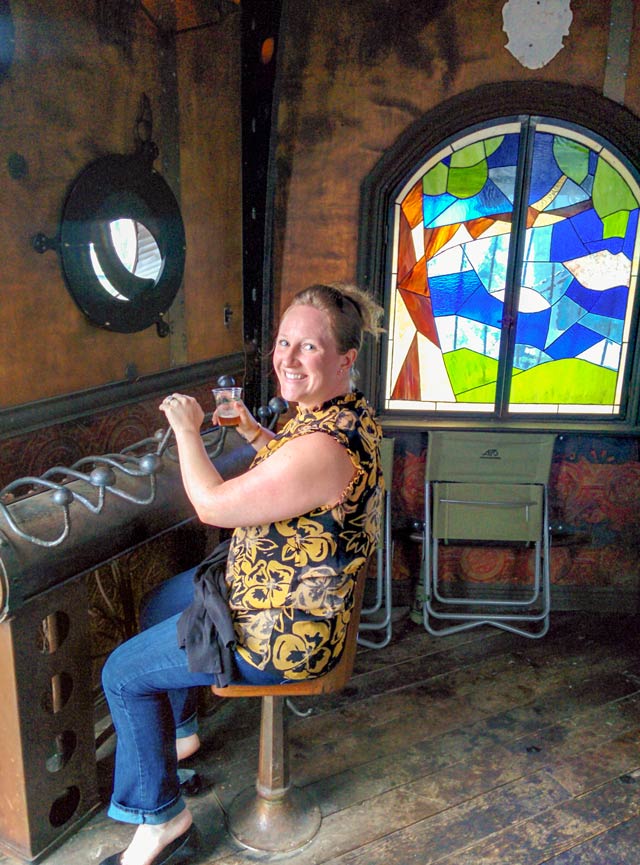 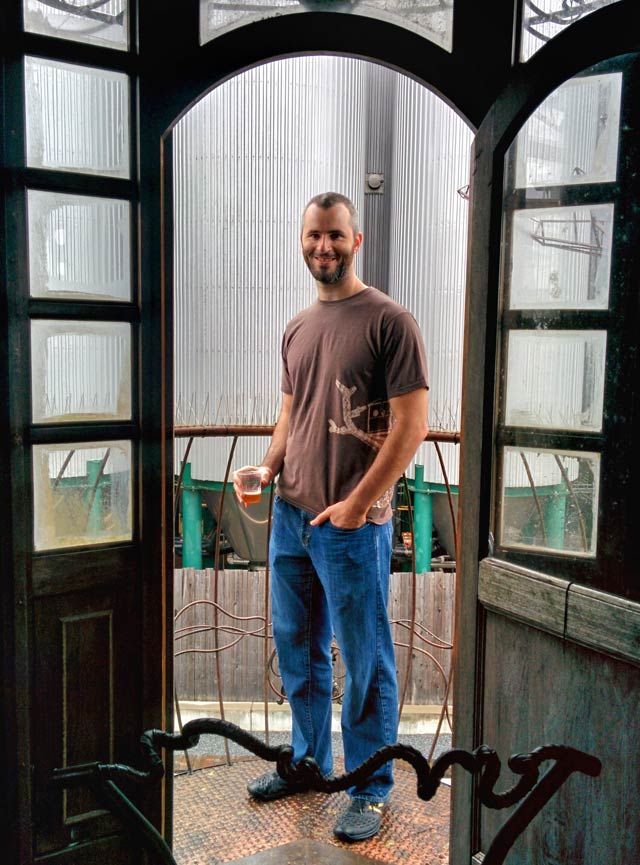 Following the brewery tour, we drove back to Rehoboth to eat dinner at Chesapeake and Maine, the new seafood restaurant owned by none other than, Sam Calagione. Seeing as it was dinner time on a Saturday night, we opted to sit at the bar, rather than wait for a table. We do this a lot when eating out because it’s generally quicker service, there’s no wait to be seated and we get to interact with more people. You guys…the food here was wonderful! We were stuffed by the time we had our drinks, an appetizer, entrees and even dessert, but I’d do it all over again in a heartbeat. If we hadn’t been sitting at the bar then we probably wouldn’t have known that we could buy 750mL bottles of the Dogfish Moscow Mule mix. But thankfully we were, and we did and it was a nice treat to enjoy once we returned home. 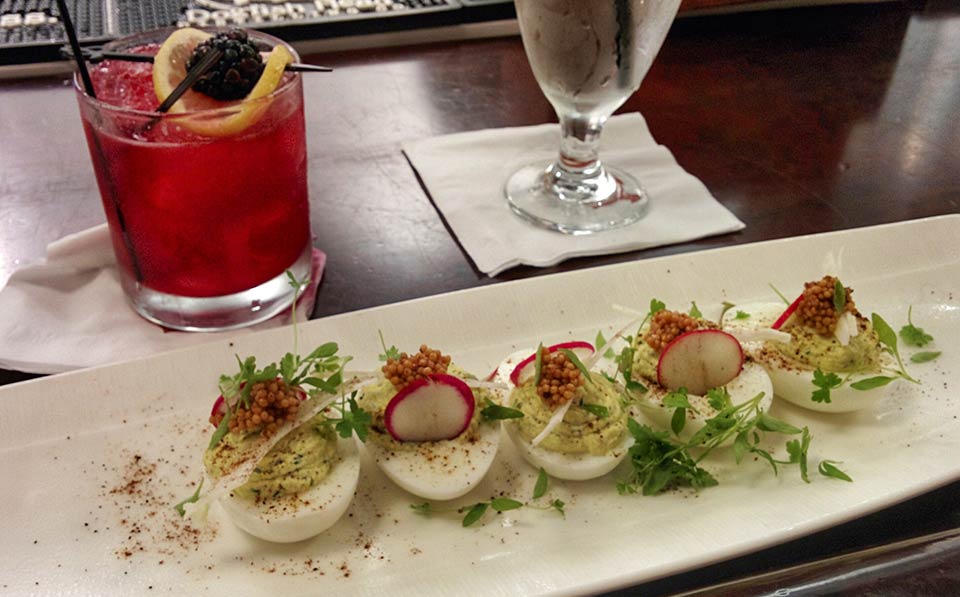 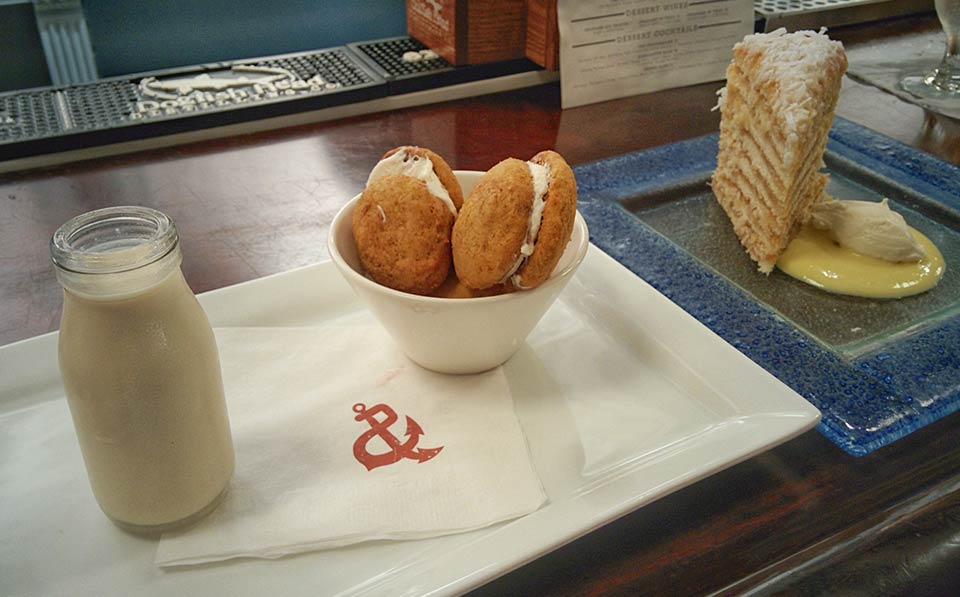 Sunday was a lowkey day since we had a nearly 5-hour drive ahead of us and we both had to work on Monday. We slept in a bit, grabbed some food and stopped at the outlets quickly before finally schlepping home, sad that our weekend was coming to a close.

Despite the fact that the weather was less than ideal, we were able to celebrate our anniversary, by doing some of our favorite things: checking out craft breweries, eating yummy food and spending quality time with each other. What more could we ask for? 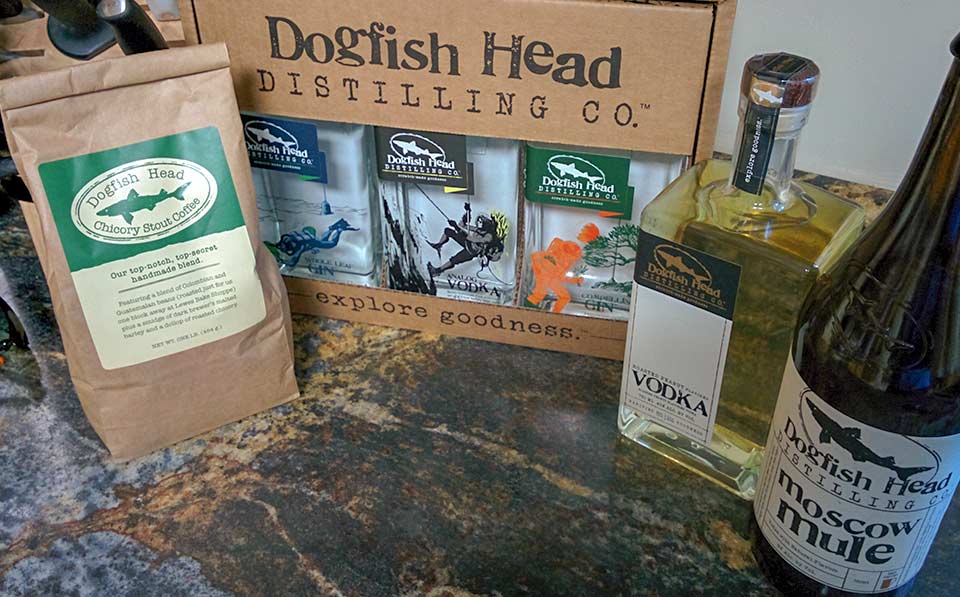 Alisha
https://www.afullerexistence.com
Teacher by day, adventurer by heart. Loves coffee, craft beer, books, my hubby and my tiny dog. Forever dreaming about my next trip.
Previous Post Why I Won’t Cruise to Alaska Next Post Book Roundup: February 2018

Alisha, I saw your post in the BBC FB group and enjoying your story. As you know, DFH is a really great place to visit and drink some amazing beer. If you ever need a reason to return, I’d suggest checking out their Weekend of Compelling Ales and Whatnot (WOCAAW) event held each March. For 2018, they had a list of great one-off versions of some of their classic beer (think Palo Santo Marron bourbon barrel aged) and each paired with food. I’ve attended the last 4 years and Sam has always been there, enjoying his guesses for the day. I hope to meet you at the BBC in August. Cheers, Jack
This is a blog post I did for one of those events. http://www.deepbeer.com/journal/2016/6/20/the-epic-vertical

Thanks for the read, Jack! After checking out your post on WOCAAW, I’ll have to keep my eyes peeled for info on the upcoming event as it sounds like something my hubby and I would thoroughly enjoy. We love all things DFH, if you couldn’t already tell. 😉 Though my partner in crime won’t be with me for BBC, it would be great to meet you then. Are you doing any of the preconference excursions?